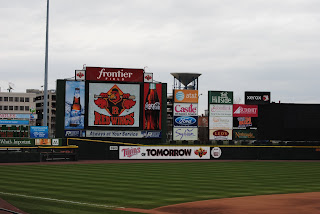 A blustery Saturday afternoon in Rochester, NY paid heed to a flurry of runs and a Rochester Red Wings 9-7 win over the Pawtucket Red Sox.

Despite Rochester’s offensive struggles, the Red Wings were able to take full advantage of mistakes by Alfredo Aceves and Matt Fox to even the series at one. Fox, initially slated to start, was bumped for Aceves who was optioned to Pawtucket after the Red Sox activated Matt Albers from the 15 day DL.

The PawSox jumped out to a 3-0 lead in the top of the 1st after a 2-run triple from Josh Reddick and an RBI single from Hector Luna in his first at bat with the club. Rochester starter Yorman Bazardo was bailed out with a 4-6-3 double play, weathering the early storm that Rochester responded to in the bottom of the 3rd with 3 runs of their own.

Aceves began the bottom half of the inning by allowing consecutive singles to Toby Gardenhire, Ben Revere and Brian Dinkleman. After a sac-fly from SS Trevor Plouffe and an RBI single for LF Rene Tosoni, the Red Wings tied the game on a 1 out sac-fly from Dustin Martin.

Fox proceeded to relieve Aceves in the 4th and gave up two more earned runs, one of which was a solo home run to Toby Gardenhire. It was only the third of his professional career for the son of Minnesota Twins manager Ron Gardenhire in 1310 at bats.

Control issues plagued both teams today as 5 batters were plunked. Matt Fox also had 3 wild pitches which came back to haunt him in the 5th when one moved Brian Dinkleman into scoring position and a second scored Dustin Martin from 3rd after a 2 run double.

Rochester’s bullpen was able to hang on, aided by two strong innings from Kyle Waldrop as he induced 5 ground ball outs. The PawSox, owners of 6 come from behind victories this season, weren’t able to break Waldrop or Phil Dumatrait, who earned the save despite allowing a solo home run to Drew Sutton.

Pawtucket will attempt to rebound tomorrow in a 1:05 start. Anthony Swarzak and Kyle Weiland are expected to get the ball for Rochester and Pawtucket, respectively.

-Coming into this afternoon, Pawtucket was 6-0 when hitting a home run. Drew Sutton and Luis Exposito went deep in the losing effort.

-Hector Luna left the game in the top of the 6th after being hit by a pitch.

Posted by Thomas Saucke at 5:53 PM