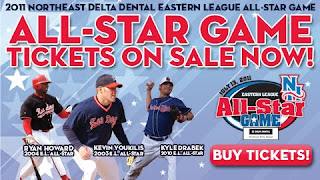 Tickets went on sale today for the 2011 Eastern League All Star Game, hosted by the New Hampshire Fisher Cats at Northeast Delta Dental Stadium in Manchester.

The team last hosted the event only four seasons ago in 2008 when future Major League players Travis Snider, Austin Jackson and Luke Hughes all made appearances.

So what future big leaguers will make this year's mid-summer classic? The list could be a long one, but here are some potential top-prospects who may be spending July 13th at NeDDS:

We have already secured our seats and hope to see you there for this fantastic night showcasing some of the best talent in Minor League Baseball. Click on the picture above to be directed to ticket sales...and get them now while great seats are still available.
Posted by Craig Forde at 10:10 PM