OK, so I just noticed that June is happening soon…like tomorrow! I’m way out of the loop here and a bit behind on things, but I must promote the promos around the region…unfortunately it’s just going to have to be a bit shorter than usual. This time around, since we have the three New York-Penn League teams joining the mix, I’ve simply picked the “best” promo on the board for each team and if something big comes up throughout the month, I’ll be sure to give you the heads up. Without further ado, here is the abridged version of the best promos in the region for the month of June:

Connecticut Tigers
Monday the 20th – Opening Nights/Fireworks/Magnet Schedule/Social Media Monday – Follow the Tigers on Facebook and Twitter for the social media aspect of things, which includes specials and discounts. Everything else speaks for itself really. Another season of baseball will kick off at Dodd Stadium with fireworks to follow and you get something to hold up your kid’s special painting on your fridge…and also will allow you to plan your next visit to Dodd Stadium! to hover over LeLacheur Park and dump a grand in cold hard cash all over the field. Once the last bill hits the ground it’s an all out rampage to scoop up what you can and try and earn a refund on your ticket costs or maybe your beers for the day. Either way, at the end of the day, a free buck is a free buck…I just want to see the helicopter blow all the money over the outfield wall and into the Merrimack, just for fun.

New Britain Rock Cats
Saturday the 25th – Post Game Launch-A-Ball/Sammy Saturdays/Waterbottle Giveway – It’s going to get real hot around here very quickly and you need to stay hydrated, so get yourself a fancy receptacle to carry around your ice cold water in all summer long. Unfortunately, it does not come equipped with refreshing water in it when you get it, so you should take advantage of great beer specials at the Sam Adams Bar & Grill as part of Sammy Saturdays. Two great ways to quench your summer thirst…as for “Launch-a-ball,” I honestly have no idea what this is, but three things sound better than two, right!?

New Hampshire Fisher Cats
Sunday the 26th – Kyle Drabek Bobblehead Night – I was recently at a game at Northeast Delta Dental Stadium where the crowd was the seventh largest in team history at 8,107 paid attendees. It was also the largest Sunday crowd ever for the Fisher Cats. I have a feeling that if the weather is right, then that mark may just be eclipsed on this day. After Drabek’s award winning season in Manchester last year, he has become a bit of legend around NeDDS, so I assume the masses will be clamoring to get a piece of this giveaway, which commemorates Drabek’s no-hitter thrown on July 4th last season. Only 1,500 fans will be lucky enough to snag one!

Pawtucket Red SoxSaturday the 14th - Red Sox Legends Night – Former Boston Red Sox fan-faves Bill Lee and Jose Santiago will be on hand signing autographs throughout the game. Sure, Bill Lee seems to be everywhere and has almost sapped his whole “Spaceman” routine with how inundating it seems to have been over the last few years, but he’s still a treat to see and an amazing baseball mind. On the other hand, when was the last time you heard that Jose Santiago was going to be around?

Portland Sea Dogs
Thursday the 30th – Breakin’ BBoy McCoy – Listen, it was between this and a Jimmy Buffett impersonator, and after you view the video below (bottom of this post), I think you’ll agree that the right choice was made here. Now if it were a Breakin’ BBoy McCoy impersonator, then I would have passed, but this is the real thing kids, for what looks like his only regional appearance. I’ve been combing YouTube clips of this guy for about an hour now and from all the comments people have posted, there is no denying that the dude certainly entertains the crowd. I can hear the phone lines at Hadlock lighting up…I’m still enjoying the clips.

Vermont Lake Monsters
Monday the 20th – Opening Night/Magnet Schedule/Kids Run the Bases – OK, so I must admit that the Lake Monsters promos were verrrrry slim (I’m happy I only chose to go with one for each team this month, because even this one was a struggle). Sure it’s similar to the Tigers promo, but seriously, you have a second chance at the fanfare that is an Opening Night baseball game, so you might as well take advantage. Then the little ones can run the bases at one of the oldest baseball parks in the nation.

For those who need some pop after their games, here is the listing for FIREWORKS nights:
Connecticut - 20th
Lowell - NONE
New Britain – 24th (special effects pyro show)
New Hampshire – 9th, 11th, 23rd, 24th, 25th
Pawtucket – NONE
Portland – 23rd
Vermont - NONE

And don’t forget about the best season-long promo running; the KRAFT Singles Tuesday Night Tickets promo, where you can buy 1 ticket and get a free 1 when you bring a wrapper from any KRAFT singles wrapper to the box office. Click the logo for more details… 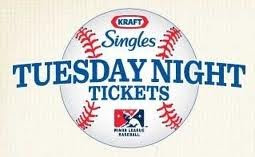