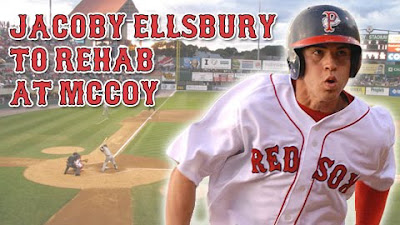 So apparently Jacoby Ellsbury will start rehabbing in Pawtucket starting Saturday when the PawSox return to McCoy Stadium to face the Durham Bulls. Ironically, it is Jacoby Ellsbury Bobblehead Giveaway night in Pawtucket. The first 4,000 fans through the gate get the bobblehead, everyone else gets a knee to the ribs courtesy of Adrian Beltre.

This is the second rehab trip this season that has taken Ellsbury through Pawtucket. He played one game with the PawSox back on May 17th and went 1-3 with 1 RBI and 2 runs. Earlier this week Ellsbury started his rehab stint and played three games for the Gulf Coast Rookie Red Sox.

The Durham Bulls come into town as the best team in the International League with a 66-40 record and they are in the midst of a 9-game winning streak. Only general admission tickets remain at this time.