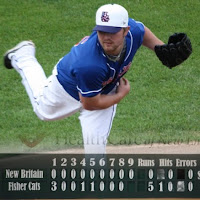 Congratulations to New Hampshire Fisher Cats pitcher Kyle Drabek who became only the second pitcher in Fisher Cats history to throw a no-hitter, and the first to throw one over nine innings. The only other no-hitter in team history came back in 2004 when Jamie Vermilyea pitched a perfect game over seven innings as part of a doubleheader. Ironically, both New Hampshire no-nos came against the New Britain Rock Cats.

Drabek, one of the prized pieces in the Blue Jays trade of Roy Halladay, improved his record to 8-8 on the season and the no-hitter comes on the heels of his Eastern League All Star selection. The #1 prospect in the Toronto farm system is now poised to make the jump up to AAA Las Vegas, but there has been no word on any promotion at this time...so if you get the chance, get out and see this bright, young star pitch before he becomes a big leaguer!
UPDATE: Due in large part to his efforts last night, Kyle Drabek has earned Eastern League Pitcher of the Week honors. He went 1-0 over a stretch of two games, allowing only 5 hits and 4 walks over a span of 16 innings. He struck out eight batters as well and has kept the opposition hitless over his last 13.1 innings of work. Drabek becomes the fifth Fisher Cat player to earn a player of the week honor.
Posted by Craig Forde at 8:27 AM