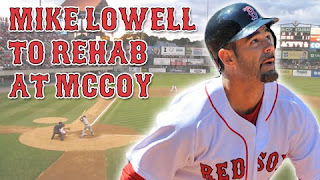 Dice-K, Ellsbury, Cameron, Buchholz, Beckett....Mike Lowell lends his name to this illustrious list of Red Sox players who rehab in Pawtucket this season. Obviously Boston has been decimated by injuries this year, but Pawtucket has been there to help shake the rust off as the players work their way back to the big club. Mike Lowell has been on the DL since June 23rd with a strained hip, but is now set to start his rehab stint this Thursday at McCoy Stadium. PawSox.com

The New Haven Register caught up with Portland Sea Dogs pitcher Casey Kelly and discussed the tough decision he had to make in choosing a baseball career over football. Kelly was a big-time QB prospect and had a free ride to Tennessee on a football scholarship. Following the Kelly piece is a story about New Britain Rock Cats pitcher Kyle Gibson and how he is seemingly a natural when dealing with the media. New Haven Register

If you are the type of person that will fill out a bracket for any type of competition, then MiLB.com has something for you. This week they launched their "Minors Moniker Madness" campaign where they pit 64 of the best names in Minor League Baseball against each other in a March Madness-esque tournament. The winners are actually chosen by fans who can fill out and submit a bracket online for free. Past winners are Dusty Napolean ('09), Will Startup ('08) and Houston Summers ('07). Local entries include T.J. Large (PawSox), Seth Schwindenhammer (Spinners) and Yangervis Solarte (Rock Cats). Minors Moniker Madness

If the Lowell Spinners can't win on the field, then they'll win in the stands dammit! For the second time in team history, the Lowell Spinners organization and it's fans have set a World Record. Back in 2004 they entered the Guinness Book of World Records for participating in the largest game of "Duck, Duck, Goose". This past Friday they honored 50 years of Bubble Wrap by having the most people simultaneously pop the wonderfully noisy packing material. Bubble Wrap Recap
Posted by Craig Forde at 11:31 AM